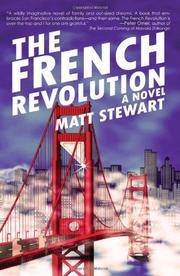 The author's first novel lifts the misadventures and mishaps, ambition and artifice from the French Revolution and reproduces them in San Francisco, recalibrating the affair with a touch of post-modernism and more than a whiff of whimsy.

The story begins with Esmeralda Van Twinkle—once a celebrity pastry chef who ambition propelled into eating herself into a morbidly obese copy-shop employee—being seduced by a professional discount coupon distributor, Jasper Winslow. The aphrodisiac is “Zoogman's masterpiece,” a “triple chocolate truffle swirl cheesecake.” The assignation produces twins, Marat and Robespierre Van Twinkle, names bestowed because the boy and girl were born on Bastille Day. Assorted bizarre characters enter, leave and reappear across a narrative timeline, which extends into the future, where opposition to a war in Iran compels daughter Robespierre to enter San Francisco politics. There she will be undone in a race for mayor by a convoluted conspiracy, prompted by Marat's duplicities and with Jasper's sins as the catalyst. Readers might think the latter is a stretch, given what they've learned of humble Jasper. Every character, large or small, is exaggerated past eccentricity, a seemingly deliberate plot/narrative device. Esmeralda is never an especially sympathetic protagonist. Her children, her mother, Fanny, a sad tyrant trapped in a widow's cottage, the supporting cast of drug dealers, murderers and such generate no empathy either. But the characters are what they need to be to make the story viable. Chapters begin with short comments on the French Revolution, and history buffs can find allusions to the bloody quest for Liberté, Egalité, Fraternité. Best of all, Stewart's language sparkles, sometimes riffing like Bob Dylan, always moving the narrative forward.

The novel, first issued via Twitter in blocks of slightly more than 100 characters, provides easy entertainment in book form.