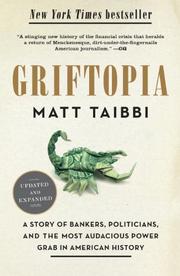 Bubble Machines, Vampire Squids, and the Long Con that Is Breaking America

A ticked-off field guide to modern America, a place where the con artists of high finance call the shots.

“There are really two Americas, one for the grifter class, and one for everybody else,” writes Rolling Stone correspondent and frequent TV commentator Taibbi (The Great Derangement: A Terrifying True Story of War, Politics, and Religion at the Twilight of the American Empire, 2008, etc.). Given that almost everybody in that “everybody else” category knows nothing about how finance works, it’s all too easy for the grifters to convince us that Wall Street is our friend and Washington our enemy. The author writes with populist fervor, but with the left-trending populism of an Upton Sinclair rather than a Father Coughlin. He has no use for the teabagger crowd or its prom queen, Sarah Palin—who, he writes, with memorable venom, “looks like a chief flight attendant on a Piedmont flight from Winston-Salem to Cleveland, with only the bag of almonds and the polyester kerchief missing from the picture.” For all that, he does not discount the wrath that Palin and her cohorts express; even though it’s misplaced, he writes, it’s very real. Whether his patient explanations will ever reach that crowd remains to be seen, but Taibbi writes carefully about such things as the way that “gamblers disguised as Wall Street brokers” manipulate commodities to the exclusive benefit of the small capitalist—grifter, that is—class. The author writes with scorn for recent political maneuverings that amount to giveaways great and small to the con artists, not least of them the health-care reform package so despised by right-wingers—who, Taibbi adds, have ever since “disgraced themselves by spinning out one easily debunked lie after another” and otherwise behaving like infants.