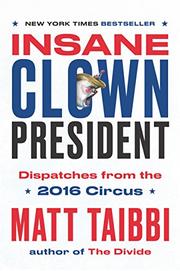 Dispatches from the 2016 Circus

Looking back in bemusement and (eventually) anger at the 2016 presidential campaign with Rolling Stone’s pugnacious political correspondent.

This collection of long- and short-form reports by Taibbi (The Divide: American Injustice in the Age of the Wealth Gap, 2014, etc.) unfolds as a comedy that slowly turns into a horror movie. In August 2015, he was having a sardonic laugh at the “GOP clown car,” the dire assortment of Republican presidential candidates. Sure, the presence of Donald J. Trump in the field ran the risk of his becoming “the most dangerous person in America.” But even up until Election Day, Taibbi never quite believed Trump had a chance at the White House. Early on in the race, he was casually establishing debate drinking-game rules and speculating about (of all things) who’d play John Kasich in the movie version of the campaign. Once Taibbi began attending Trump’s rageoholic populist rallies in early 2016, though, he sobered up and delivered a darker vision of a country menaced by media manipulation. Vivid zingers remain Taibbi’s calling card: George Will is an “establishment GOP spokesghoul,” and he likens Trump spokesperson Katrina Pierson’s rhetorical contortions to “a kitten try[ing] to crawl out of a wood-chipper.” Though he expends most of his powder on conservatives, the author wasn’t much impressed with Hillary Clinton either: he criticizes his employer’s official endorsement of her, arguing that “she has been playing the inside game for so long, she seems to have become lost in it.” Taibbi is cleareyed about the populist forces and fractured media landscape Trump exploited, but given his admission of underestimating Trump’s chances, his first-chapter victory lap, which annotates a chapter from his 2008 book, The Great Derangement, to show how much he’s correctly predicted, feels defensive if not unseemly.

A lively set of dispatches that shows how even the harshest skeptic in the pundit class can be blindsided.