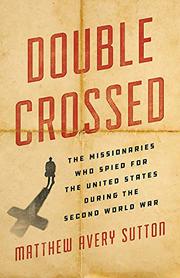 The little-known history of the “sometimes comic, sometimes tragic, and sometimes profound ways that the founders of the United States’ pioneering foreign intelligence service tried to use humans’ deep spirituality as a tool for war.”

The subjects of this military history were missionaries during World War II, sent by their houses of worship to spread the word of God throughout the world. But they also were American spies, charged by their handlers with all sorts of clandestine work that even included assassination plots. Though there were dozens of them, including Protestants, Catholics, and Jews, Sutton (History/Washington State Univ.; American Apocalypse: A History of Modern Evangelicalism, 2014, etc.) focuses on four of them—William Eddy, John Birch, Stephen Penrose, and Stewart Herman Jr.—who served in a variety of arenas, from major embassies to the front lines. (One even led an air raid that killed scores of Japanese fighters.) Most of the missionaries agreed to their missions because they thought of America as the classic city on the hill. Sutton’s research is impressive, his writing is clear, and his account is exhaustive—but also occasionally exhausting. It seems the author couldn’t bear to leave any of his research in his notes; as a result, the primary narrative often gets buried beneath an avalanche of detail. Still, Sutton rescues a crucially important story that raises profound questions regarding the relationship between God and country. Even the missionaries, whose work helped win the war and led to the founding of the CIA, ended their careers wondering whether they had served God or mammon (as the author notes, they "sometimes served their god and the gods of war at the same time”)—and whether they could ever be trusted again by anyone, even themselves.

Scholars will appreciate the thoroughness and lucidity. General readers may want to skim certain sections.