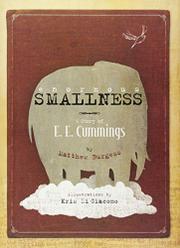 A Story of E.E. Cummings

A picture-book biography of the poet, with appropriately quirky multimedia illustrations.

Burgess takes young readers from the birth of Edward Estlin Cummings in Cambridge in 1894 through his decades in Greenwich Village as an established poet. The economical text emphasizes his connections to the natural world, manifesting in his first poem, composed at the age of 3, and the loving support of his parents. Even as a boy, he played with words, inventing new ones and “squish[ing] others together.” Burgess chooses details that will speak to child readers: Estlin’s idyllic, streamside summers; his treehouse in Cambridge (equipped with a stove!); the encouragement of a favorite teacher; the “Krazy Kat” comic strips he affixed to his dorm walls; and especially, his effervescent, rule-breaking approach to writing poetry. Using muted, modernist hues, Di Giacomo incorporates letters and words into her double-page spreads, jumping them through a hoop in an imagined circus scene that emphasizes Estlin’s fearless wordplay and depicting them springing from the open pages of his first published book along with the titular Tulips & Chimneys. The use of a classic typewriter typeface to set cummings’ words apart from Burgess’ text is nicely apropos. Backmatter includes a chronology, the five poems, dated, that appear earlier in the book, an author’s note, and acknowledgments (which double as a bibliographic essay).

An eminently friendly introduction to both the poet and his spirit—deceptively simple, just like its subject.