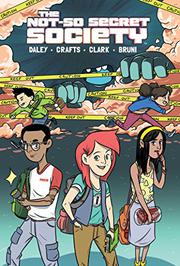 Tale of the Gummy

Some tweens face their biggest challenge yet when their science fair submission morphs into a colossal, candy-crazed gummy bear in this graphic novel.

The 12-year-olds who make up the Not-So Secret Society—Aiden, Madison, Emma, Dylan, and Ava—are ready to brave the mythical world under the city. But first things first: their project for Mr. Pham’s science class is due tomorrow. Unfortunately, the snarky 5Z’s (Zuri, Ziran, Zed, Zamara, and Zach) show up fellow students with their invention—an Energy Cube—and boast about their anticipated triumph at the upcoming All-City Science Fair. After Ava confidently announces in class that NS3 will likewise be submitting something, the group scrambles for an idea, finally settling on a machine that brings candy to life. Amazingly, the contraption’s successful, and the friends have a walking Bear Hug, a tiny gooey treat they name Gummy. As it turns out, Gummy loves candy and, rather unexpectedly, increases in size with every piece he eats. The band recognizes that this is a potential problem but sadly can’t prevent Gummy from running off and gorging himself on sweets. NS3 tries capturing the bear before he gets bigger, but Halloween’s arrival means a plethora of readily available, now-dangerous candy. This winning tale by Matthew Daley (Lantern City, 2015) and debut author Arlene Daley is energized by a racially diverse cast of tween protagonists with assorted interests and problems. Ava’s love of wrestling, for one, contrasts with her small stature, while Emma’s shyness (displayed with faint dialogue-balloon text) becomes a hurdle to overcome. The comedy’s silly but good-natured, with the authors fully aware of the absurdity. Fearing Gummy will destroy the world, Ava notes: “We’re going to be in so much trouble.” There are pop-culture references (a giant squishy bear recalls 1984’s Ghostbusters) and educational value, like how to combat a sugary adversary. Clark’s (Regular Show, 2016, etc.) illustrations are brightly colored with bold lines and precise character features; some visuals, like the city’s library and Halloween extravaganza, are beautifully intricate. The book also includes 25 hilarious mini-comics from various artists and learning activities for young readers (including recycling).

An appealing adventure; vibrant in characterization, humor, and imagery.