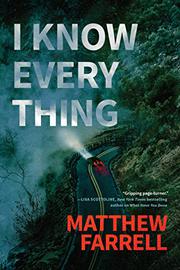 A fatal car crash off a cliff in New York's Hudson Valley turns out to be homicide.

Farrell (What Have You Done, 2018) opens with a gruesome prologue set in a basement, where an unnamed dying man chained to a wall surveys two corpses while hearing noises upstairs. Chapter 1 jumps to psychologist Randall Brock’s research on talk-therapy methods designed to reduce and eliminate patients' homicidal fantasies. Brock himself becomes a murder suspect after his wealthy philanthropist wife, Amanda, dies in an automobile accident the same night she's received a humanitarian award. Police officer Susan Adler leads the investigation; she's a single mother struggling to balance her commitment to criminal analysis while raising two sons whose father fails to take them on a promised ski trip to Vermont. Adler’s attractive new partner, Tommy Corolla, charms Adler and her children and wants to take her out after the case closes; he suspects Brock: “It’s always the husband.” The night of the accident, a mysterious stranger catches Brock’s attention at the awards dinner, then shows up at his office after Amanda’s death. The stranger knows about the death of Brock’s brother when they were children, declares to Brock that Amanda was murdered, claims to have seen the whole thing, and offers to tell Brock who killed her in exchange for Brock’s revealing his own truths, although the arrangement will be off if Brock tells police about their encounters. The stranger seals the deal by revealing one of Amanda’s dirty secrets. Heavy-handed exposition sometimes weighs down the dialogue, short sentences the author uses to close chapters fall flat, and some of the plot twists are predictable.