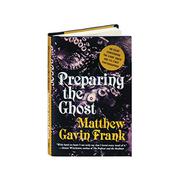 An Essay Concerning the Giant Squid and Its First Photographer

An investigation of our first encounters with the giant squid, a creature “more bizarre than anything appearing in Star Wars.”

Poet and creative writing teacher Frank (The Morrow Plants: Poems, 2013, etc.) moves like a wraith around the myth, superstition and spirit of the giant squid—and not as a single-subject exploration but through the conjured memory of Moses Harvey, a preacher in Newfoundland during the mid-1800s. Harvey had heard stories of the beast—a kraken, a devil-fish that lived up to its name—and one morning in 1874, he was able to lay eyes on one. It was washed ashore, dead, but damn if he wasn’t going to commune with the creature up close and personal. He paid some men to carry the squid to his tub—“Nothing says domestication like a giant squid strung over a clawfoot bathtub”—before he said farewell and shipped it off to Yale for safekeeping. Surrounding the event is a great embroidery of story: “I am mythmaking, I suppose,” writes Frank, and he does it with transporting authority. Readers walk through the cold, pins-and-needles rain that falls forever in Newfoundland and perambulate the town as Frank walked it in modern times. The author concocts the background out of whole cloth, an imagined scenario. Though there are facts enough to keep it real, there are also moments in which there is a strong sense of the unconscious at work. “Somewhere, in the recesses of these recessive versions of our dominant truths,” writes Frank, “behind a daisy chain of lanterns and Darwin’s theories drunk and conga-lining, Rudolph Valentino was blond.” This track eventually wends its way back to myth and Newfoundland.

Fantastical, atmospherically moody and Poe-like in its laudanum-fueled dreaminess.