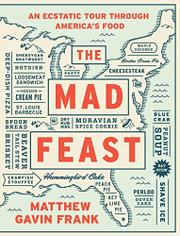 An Ecstatic Tour Through America's Food

A journey in search of America’s tastes.

Frank (Preparing the Ghost: An Essay Concerning the Giant Squid and Its First Photographer, 2014, etc.), a former restaurant worker, eats his way across the United States with a few questions in mind: “What does a typical foodstuff associated with said state mean? How do state and history and foodstuff relate?” His “spastic, lyrical anti-cookbook” devotes a chapter to each state, a collage of impressionistic fragments that are alternately interesting and exasperating: personal anecdotes, history, geography, botany, zoology, food lore—and ending with a recipe. In Oregon, for example, besides relating the creation of the hybrid Marionberry, beloved by Oregonians, the author considers cannibalism, inspired by his discovery that the state’s motto was written by a settler whose wagon train companions headed for California, doomed to become the infamous Donner Party. Among myriad other historical details, readers will learn that Rhode Island was named by the explorer Giovanni da Verrazzano because he believed it resembled the island of Rhodes. Enough water pours over Niagara Falls every minute to make 640 million cups of coffee. New Mexico’s official state butterfly is named the Sandia hairstreak for its “zippy flight.” As for food, in South Carolina, where “racist white men…make the state’s best barbecue sauce,” the author finds perloo—“sister to jambalaya, brother to pilaf, cousin to paella, to risotto, biryani”—based on rice imported, along with slaves, from Africa. In Iowa, Frank extols the Loosemeat Sandwich, which, unlike a hamburger, “begins its life closer to being chewed and swallowed,” an appropriate dish for a landscape often chewed up by tornadoes. Boiled bread, a bagel expert tells the author, began in the Middle Ages, when Jews were forbidden to bake dough. During the Black Death, they strung boiled bread rings onto rope and fled the pestilence.