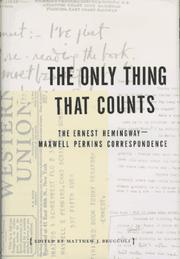 THE ONLY THING THAT COUNTS

Underneath the usual authorial complaints about royalties and editorial requests for finished manuscripts, Hemingway's dedication to his craft, and Perkins's to Hemingway, come through in this carefully abridged selection. Elsewhere Hemingway wrote, ``Plenty of times people who write the best write the worst letters.'' But he only occasionally exemplifies this rule himself. His correspondence with august editor Maxwell Perkins, spanning the businesslike and the personal, has the benefit of focusing on Hemingway's literary career, which sprawled through the Selected Letters (1981). Here we get to look over their shoulders during Hemingway's early time with Scribner's, in which he often has to defend (and sometimes amend) his use of strong language, starting with The Sun Also Rises, and to battle against cuts in magazine serializations (``Half the writing I do is elimination''). In this rich, sometimes swamping flow of letters, we see Hemingway's guard going gradually, but never totally, down and Perkins moving from literary associate to confidant (thanks to a fishing trip to Key West). Amid the quotidian debates about advertising and royalty advances, Perkins also has to insert himself into the Fitzgerald-Hemingway rivalry (Hemingway's side is candid but brutal) and diplomatically participate in literary feuds with Gertrude Stein and others, and critical skirmishes, notably involving Max Eastman, whom Hemingway wrestled to the floor in Perkins's office. Given Hemingway's fundamental unreliability about himself, Fitzgerald maven Bruccoli (Some Sort of Epic Grandeur: The Life of F. Scott Fitzgerald, 1981, etc.) has something less than a biographic account, even after judicious assembly, sundry cuts, and helpful footnotes and chronologies. Still, these letters deliver the documentary evidence, sometimes unflatteringly, but always for Hemingway's serious craftsmanship and Perkins's subtle caretaking. Although the volume represents only a fractional side of Hemingway's life, it carries his last word on Perkins: ``You are my most trusted friend as well as my God damned publisher.'' (illustrations, not seen)