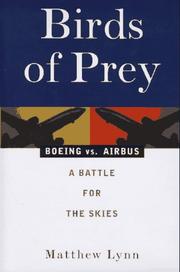 Boeing vs. Airbus: A Battle for the Skies

A British journalist's matter-of-fact take on how a state- subsidized European consortium has managed to narrow the long lead once held by American manufacturers in the high-stakes competition to equip the world's airlines with jet planes. Drawing on his own reportage as well as secondary sources, Lynn first sets the stage, reviewing the commercial development of jet propulsion after WW II in the United Kingdom and the US. While Europe briefly showed the way (with the Caravelle, the Comet, and the famously unprofitable Concorde), he notes, US airframe makers (Boeing, Convair, Douglas, Lockheed) took most of the orders for passenger jets. Lynn goes on to recount how national pride and economic necessity induced the French to challenge America's dominion in aerospace by establishing Airbus Industrie (AI) within months of Boeing's delivery of its first 747 jumbo jets. Against the odds, the fledgling firm spotted and exploited a gap in the international market, selling enough medium-range, wide-body A300s to keep Paris and the EU partners in business. Continental capitals also used their geopolitical clout, permitting Airbus to adopt the so-called ``silk route'' strategy that gained it significant sales in Asia and the Middle East at the expense of US suppliers. And on the wings of some decidedly concessionary deals, AI even cracked the American market. Although the role government has played in bankrolling Airbus was a real sticking point in recent GATT negotiations, the point was finessed and a trade war averted. Accordingly, Boeing (which is to acquire McDonnell Douglas) faces a less secure future in which it must do battle against a formidable rival that may yet become a limited company accountable to stockholders as well as politicos. While Lynn, a staffer at the Sunday Times of London, writes serviceable prose at best, this is a workmanlike briefing on a consequential clash affecting the latter-day wealth of nations.