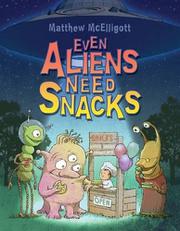 When his summer snack stand fails to attract family and neighbors, an enterprising young chef with a flair for the unusual draws some very weird customers from way out of town.

This creative young boy likes to help his mom cook and make up his own recipes. His sister finds his eggplant, mustard, and lemonade smoothie disgusting and warns him that no one in the world or the universe would eat what he cooks. Undaunted, he builds a snack stand, but no one comes for his waffles, smoothies and sandwiches. Just as the boy gives up, a flying saucer lands near the shack one night, and his first alien customer samples the mushroom iced tea. Word spreads through the galaxy, and creatures line up nightly for their favorite dishes: Swiss-cheese doughnut holes, turnip-side-down cake, sponge cake with leeks, and bean puffs. But when the boy mixes all his favorite ingredients into Galactic Pudding, he may have gone too far for even his far-out clientele. Rendered in ink, pencil and digital techniques, quiet illustrations embellish the spare text by casting glowing moonlight on a bevy of eerie, silly, fantastical extraterrestrials in nocturnal purples, blues and greens. Whimsical pairing of creatures and snacks—an enormous critter with a giant mouthful of teeth loves the toothpaste soup, for instance—proves especially rib-tickling.