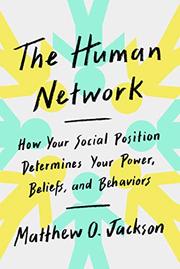 How Your Social Position Determines Your Power, Beliefs, and Behaviors

A worthy exploration of “how networks form and why they exhibit certain key patterns” as well as “how those patterns determine our power, opinions, opportunities, behaviors, and accomplishments.”

Early on in his first book for a general audience, Jackson (Economics/Stanford Univ.; Social and Economic Networks, 2008, etc.) looks at the friend paradox: Almost everyone has friends. Many people have the impression that others have more friends than they, and this is not neuroticism; it’s true. After all, popular people have more friends than unpopular people, so they are overrepresented on everyone’s list of friends, and people with few friends are underrepresented. People exaggerate the number of friends who drink and take drugs because these are social (i.e., networked) activities, and they underestimate the amount of non-networked behavior—e.g., studying. Social media amplifies this: 98 percent of Twitter users have fewer followers than those they follow. As a result, popular people exert a disproportionate influence simply because they appear to dominate our network. Jackson expands this to clearly reveal unnerving network effects in areas of our lives including journalism, public health, politics, economics, and the digital world. The wisdom of crowds is genuine. Given unbiased information, their conclusions are more accurate than any individual’s. Of course, the stupidity of crowds is equally genuine. The internet has triggered a vast expansion of human networks, but because we prefer people with behaviors and beliefs similar to ours (“homophily”), the last 20 years have seen an explosion of fake news, political polarization, and ugly nationalism. However, we have seen much of this before. “Humans,” writes the author, “have been rewired many times: by the printing press, letter writing, trains, the telegraph, overseas travel, the telephone, the internet, and the advent of social media. Perhaps it is our arrogance that leads us to assume that the current changes…are truly revolutionary and unique.”

A mixture of delicious truths and ingenious sociological concepts that will convince most readers that we pay too much attention to the people around us.