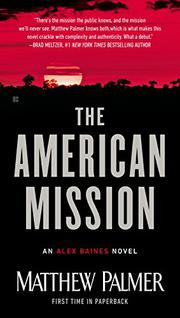 A captivating debut thriller by a longtime foreign service officer explores the complicated politics of the Congo.

“Death came on horseback,” the novel begins. Idealistic diplomat Alex Baines loses his security clearance over a disaster in Darfur, and he must decide between a civilian career and years of stamping visas for the State Department. Then a friend offers him a chance to restore his reputation, and Baines finds himself deep in the Congo. Nearly everyone wants to exploit that country’s vast mineral riches, not least Consolidated Mining. Residents of Busu-Mouli already have a modest mine along the Congo River, but Consolidated wants to take over and strip the mountain to rubble. The company has important political support, and Baines stands with Busu-Mouli’s Chief Tsiolo and his daughter, Marie, to oppose the area’s rape. An exciting story unfolds that’s filled with intrigue, murder and even romance. Will the country’s people gain from its riches, or will they have to watch helplessly while foreigners continue to despoil it as they have for a century? “We do have ways of exercising our rights in eastern Congo,” says one Consolidated company man, and those ways include guns. Palmer uses his deep knowledge of Africa and diplomacy to construct a multilayered tale about the search for peace and justice in a country that has seen little of either since Belgium’s King Leopold made it his private preserve in the 1880s. Both foreigners and Congolese are villains and heroes here, though the real power still lies outside the country. With their intelligence and humanity, Alex and Marie are easy characters to root for—but even the bad guys are well-drawn and believable.

This is first-rate fiction. Let’s hope Palmer has a sequel in the works.