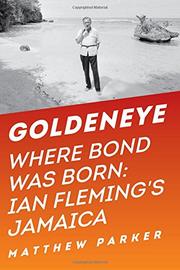 Where Bond Was Born: Ian Fleming in Jamaica

Parker (The Sugar Barons: Family, Corruption, Empire, and War in the West Indies, 2011, etc.) considers Ian Fleming’s escape to Jamaica, where he created James Bond and did his best to avoid the high-society life that followed him there.

Fleming was not fond of many non-Brits, but he especially disliked Americans. About the only American Bond character who isn’t a villain is Felix Leiter, a detective Bond cooperates with and often saves. Fleming discovered Jamaica’s wonders in 1943 and quickly bought property with a private beach where he could write, using Jamaica in three of his novels. The house he built, Goldeneye, was spare and featured minimal modern conveniences. However, nature was at her best, and Fleming was happiest during the two months each year he spent in the Caribbean. It was Fleming's paradise; he loved the tropical blooms and the fascinating sea life. At the time, Jamaica was still ruled by a governor, and the racist attitudes of visitors reflected the attitude of empire. Eventually, Noël Coward became a neighbor and lifelong friend as the Jamaican tourist boom took off. Coward brought the jet-set crowd to discover the joys of island life, and anyone who was anyone showed up. Fleming, however, was asocial, heartily disliked the procession of guests and hated his wife’s parties. He isolated himself to write, forbidding guests to even walk by his window. The author parallels Fleming’s life with postwar events that planted the seed for the Bond character. He summarizes each of the Bond books as they reflect Cold War history—e.g., the Suez Crisis, the independence movements and increasing economic turmoil.

A well-written look at Fleming’s life, though the book is even better as an indictment of the anachronistic colonialism of the 1950s and the end of the British Empire.