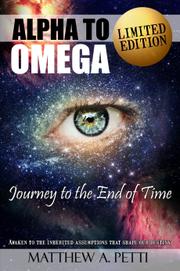 Journey to the End of Time

by Matthew A. Petti

Arguing for the existence of demigods in ancient human history, this eschatological discussion considers the fate of civilization while outlining the path humanity must take for its journey “back to Paradise.”

In Petti’s reading of ancient history, antediluvian gods aided humans in their renunciation of ego and devotion to faith. Along with his argument for the original existence of Paradise, he predicts that modern humanity will return to a state of paradise if our destiny is fulfilled. He proposes a literalist reading of the biblical flood by comparing an assortment of ancient, cross-cultural tales that make reference to events similar to the story of Noah’s Ark. Petti suggests that many of the mysteries in ancient history cannot be justified by popular scientific explanation, and they’ve been misunderstood by the dominant modern ideologies. His study of the Great Pyramid, for example, reveals an ancient structure that is, based on our modern understanding, perhaps too perfect to have been constructed by Egyptians. Other supposedly unexplainable feats of ancient civilizations—the heads on Easter Island, Olmec structures, etc.—lead Petti to conclude that our comprehension of history is both limited and flawed; therefore, we must continue the search for “Truth.” He proposes that the Great Pyramid is in fact the vessel referred to in the Bible as Noah’s Ark, which transported the gods of a failed paradise into the new world, where their goal was to lead humanity once again to a state of paradise. Petti goes on to propose that these demigods aided a number of other ancient civilizations, leading them to achieve feats that would be impossible for humans today. Unfortunately, much of Petti’s analysis falls victim to his presentation of personal interpretation as fact; it remains underdeveloped as a convincing proposal for alternative history. The nature of the content doesn’t allow for much evidence, and his attempts to apply inductive logic to biblical history ultimately deflates. As a result, the audience for this book remains narrow.

Fascinating explanations of mysterious events in ancient history, although the evidence is shallow and the argument is highly subjective.