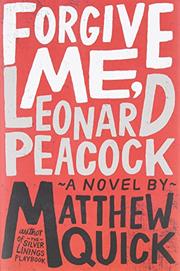 A teen boy with a World War II pistol in hand is bent on murder and suicide.

Leonard Peacock has big plans for his birthday: He’s cut his longish hair down to the scalp, wrapped some going-away presents for his friends and tucked his grandfather’s souvenir Nazi-issue P-38 pistol into his backpack. He’s off to school, but he plans to make some pit stops along the way to see his friends, including his elderly, Bogart-obsessed neighbor. After he gives his gifts away, he’ll murder Asher Beal, another boy at school. Then he’ll off himself. To say Quick’s latest is dark would be an understatement: Leonard is dealing with some serious issues and comes across as a resolutely heartless killer in the first few pages. As the novel progresses and readers learn more, however, his human side and heart rise to the surface and tug at readers’ heartstrings. The work has its quirks. Footnotes run amok, often telling more story than the actual narrative, and some are so long that readers might forget what’s happening in the story as they read the footnote. Some readers will eat this up, but others will find it endlessly distracting. Other structural oddities include letters written by Leonard to himself from the future; they seem to make no sense at first, but readers find out later that his teacher recommended he write them to cope with his depression. Despite these eccentricities, the novel presents a host of compelling, well-drawn, realistic characters—all of whom want Leonard to make it through the day safe and sound.

An artful, hopeful exploration of a teen boy in intense need.