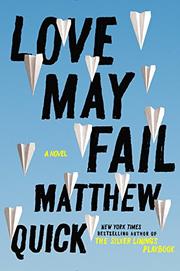 When a metal head princess, a reformed junkie, a fast-talking woman of God, and a despondent retired teacher walk into a book, unpredictable chaos ensues.

In his amusing but disjointed new novel, the author of The Silver Linings Playbook (2008) channels four troubled narrators to varying effect. First we meet Portia Kane, an aging trophy wife about to shoot her porn-producer husband and his perky teen lover. Then she wisely abandons this plan and storms out, instead embarking on a quest to save her hoarder mother, her suicidal high school English teacher, and—you knew this was coming—herself (in an awkward little subplot, this involves publishing a book that gets a poor Kirkus review). The teacher, Mr. Vernon, barely survived a beating by one of his students and now lives alone in the woods with a broken spirit, a lot of wine, and a dog named Albert Camus. (Quick does his best work with Vernon, who lusts after “the noses of Jewish women” and waxes nostalgic for “late PBS painter Bob Ross.”) Portia lands on his doorstep in time to delay his death but not before she reconnects with a hometown friend’s handsome brother, who’s been crushing on her for 20 years and later chronicles their relationship in his own section. Need a breath yet? Take one now, before the nun. Our final tour guide is Sister Maeve Smith, who speaks from beyond the grave via letters to her son, aka Mr. Vernon, after she meets Portia on a plane. Call it fate, call it coincidence, call it too much plot—either way, you can’t fault Quick for being short on ideas. All his books have been optioned for movies, including this one, and they almost make more sense that way: it’s easy to imagine this quartet of busy narrators, whose similar voices sometimes fall flat on the page, brought to life beautifully by the right cast.

An overstuffed ode to bygone pop culture and the unattainable literary life.