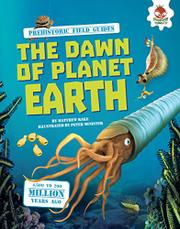 THE DAWN OF PLANET EARTH

From the Prehistoric Field Guides series

A chatty lungfish leads a quick tour of life’s evolution, from Earth’s formation to the appearance of early mammals in the Triassic Period.

“Hi. My name is Ackerley. I’m an Acanthostega.” Following introductions and quick peeks at fossilization and continental drift, the colorfully mottled narrator highlights or at least mentions around a dozen extinct creatures. These range from millipedes “the size of crocodiles” and Opabinia—“If there were a prize for The Weirdest Creature That Ever Lived, Opabinia would be a hot favorite”— to the shrewlike Megazostrodon. Though rendered in close, sharp relief, usually with mouths threateningly open (at least for those animals with visible mouths), Minister’s page-filling, digitally modeled figures often sport a shiny, plastic look. The artificiality extends to an obtrusive absence of blood and gore despite attacks and toothy chomping aplenty here and also in the co-published Dinosaurs Rule. Moreover, both volumes share substantial passages of boilerplate and mention animals that have no corresponding portraits. The closing recaps and indexes are likewise incomplete.

Chewy fare for fans of polysyllabic monikers but not a top-shelf prospect in the struggle to survive.