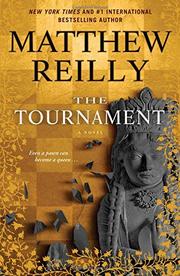 The occasion? Suleiman the Magnificent’s legendary 1546 chess tournament, the setting of Reilly’s (Scarecrow Returns, 2012, etc.) intriguing novel, a murder mystery laced with social commentary and spiced by Machiavellian ideas about the art of leadership. Nuggets of history? Reilly delves into the Muslim veil, the Sunni-Shia conflict, and Muslim preservation of classical knowledge during Europe’s Dark Ages. The clever premise takes the form of Elizabeth’s deathbed confession to Gwinny, her lifelong friend and "chief attendant of her bedchamber." The most interesting characters are the princess, "the brightest 13-year-old…and mature beyond her years," and Ascham, "big round nose, hangdog brown eyes," treasuring learning as the "noblest of all endeavors." Suleiman summons the world to the tournament, held in Constantinople’s Hagia Sophia. Henry VIII dispatches Ascham and his chess-master friend, Gilbert Giles. Since plague’s afoot, Ascham persuades Henry to permit Elizabeth, a perilous third in line to the throne, to accompany him, along with Elsie, an older but flighty girl. It’s Elsie who exposes Elizabeth to debauchery's infection within Topkapi Palace: she related "frolicking with the prince—Selim said to me, ‘English rose, you are a lover fit for a king.’ " But it’s Ascham who draws Elizabeth into a mystery he’s charged by Suleiman to solve—the murder of Cardinal Farnese, an anti-Muslim representative of Rome.

Approach with an optimistic suspension of disbelief—Elizabeth I in Constantinople investigating murders, really?—and enjoy a rollicking good yarn.