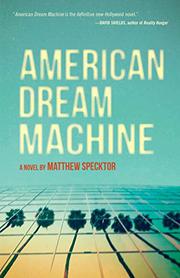 For Beau Rosenwald and his cronies in the talent agency business in the ’60s and ’70s, the American Dream Machine is alive but not always well.

Beau is the quintessential American Dreamer who feels nothing can hold him back from his own success. Despite his disjunctive name (he’s physically unprepossessing, in fact downright ugly), he has charm and on his best days, charisma. Since Hollywood is a happenin’ place in the early ’60s, Beau migrates there from New York, shortly after having gotten Rachel Roth pregnant, with twins no less. After a hasty marriage, Beau leaves Rachel and the kids in New York and heads back to LA, for after all, that’s where his future lies. He hooks up with the Talented Artists Group and becomes an agent for Bryce Beller, a hapless actor whom Beau hawks as the next person to kiss Natalie Wood on screen. Eventually, he gets Bryce a role in The Dog’s Tail, a “poetic” film Beau is trying to put together. The narrator of the novel, Beau’s son by an office fling, caustically summarizes the film: “[The] script was fathomless, yet apart from the shuddersome beginning and the end, not much happened.” Needless to say, in a city where you’re judged by your last critical success, Beau’s stock goes down. Interoffice politics soon cause Beau to break away from TAG and link up with another talent agency, the American Dream Machine, and at least for a while, things go well, for they seem to be signing legitimate talent, but ultimately, ADM becomes a mockery of its own self-naming. Beau’s life plays out against the issues of his family woes: the death of his daughter and the emotional wallop of two “friends” discovering they’re in fact stepbrothers.

A Hollywood version—literally—of how the American Dream continues to con people with its seductive illusion.