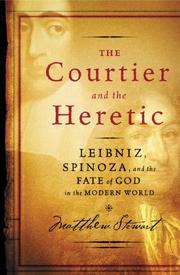 THE COURTIER AND THE HERETIC

Leibniz, Spinoza, and the Fate of God in the Modern World

An exploration of how a pair of great philosophers, “one . . . the ultimate insider, the other a double exile,” impacted both their own time period and ours.

The author begins with and pivots upon the meeting of Baruch de Spinoza and Gottfried Wilhelm Leibniz, two of the most notable wunderkinder of 17th-century Europe, at Spinoza’s home at The Hague in 1676. From that point of departure, Stewart discusses each man in alternating chapters, beginning with their childhoods and moving forward through their troubles and accomplishments, leading up finally to their brief association with one another. Having covered Spinoza’s death, Stewart charts the further development of Leibniz’s thinking, with an emphasis on Spinoza’s influence. Stewart’s thesis is two-fold. First, he wants to demonstrate the importance Spinoza had upon the thought and philosophy of his younger counterpart, Leibniz. Second, he attempts to ground much of philosophical and, indeed, world history since the Enlightenment in these two personages. Spinoza’s ideas, though popularly reviled in his day, were the basis of classical liberalism and much of our modern scientific outlook. Leibniz, in contrast, formed the basis for the conservative religious community’s response to modernism. The concept of God, and how that concept shaped, and was shaped by, each man’s philosophical arguments, is a central theme here. Stewart makes accessible the many philosophical ideas presented, and he brings the men to life with descriptions of everything from their eating habits to their priorities in daily life.

A highly readable examination of two influential, but often overlooked, thinkers of the early Enlightenment.