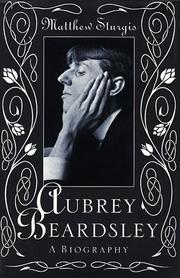 A portrait of the artist as a young decadent. Though tuberculosis killed Beardsley at the age of 25 in 1898, by then he had already attained success as an eye-catching illustrator and celebrity as the definitive graphic artist of decadence. As Sturgis (Passionate Attitudes: The English Decadence of the 1890s, not reviewed) shows, Beardsley’s accomplishments resulted from an intense dedication to his work and the sedulous cultivation of a doomed dandy’s (ultimately well-justified) pose. For all his affectations, his family was thoroughly middle-class, though his mother had an unconventional streak. Before he began studying drawing, their straitened finances forced him to take a position in London as a clerk. Although Beardsley served an apprenticeship with the Pre-Raphaelites, particularly Edward Burne-Jones (William Morris thought he had talent only for drapery), Sturgis also notes Whistler’s influence, not only through his japonisme and the “Ten O’Clock Lecture,” but also through his extravagant dandyism and instinct for public relations. Beardsley became famous for his erotic and cruel illustrations for Oscar Wilde’s Salome, yet despite his independent achievement as art editor of the Yellow Book, his fate was linked with Wilde’s scandalous downfall. Although he withstood the Victorian backlash and being fired from the Yellow Book, his death from tuberculosis—the era’s epitomizing disease—in truth capped his career. The notable company Beardsley kept yields numerous interesting anecdotes and bon mots from Wilde, Whistler, Frank Harris, Max Beerbohm, and W.B. Yeats, though Sturgis always qualifies, and sometimes must correct, their unreliable testimonies. With occasionally arch prose, the author places Beardsley as a significant presence in a larger group. The only drawback to Sturgis’s biographical approach is his failure to examine the importance of sexual obsession and satire to Beardsley’s artistic persona. A life rendered with rich detail and sly touches—but not deeply. (16 pages b&w photos, not seen)