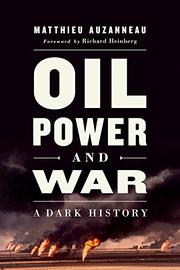 Thoroughgoing, politically charged study of the role of fossil fuels in world history.

As French journalist Auzanneau writes, “at the heart of the political and geopolitical strategies” of the major Western powers in the postwar era was a calculus “overlooked by classic economic science”—namely, that the expansion of their economies was contingent upon the expansion of available supplies of oil and gas. Underlying the postwar boom, then, was a boom in energy sources, as the U.S. consolidated its hold on the Middle East while enjoying record production at home. The more-or-less stagnant economies since then correspond to a decline in energy availability, with jolts provided by the advent of sources like shale oil in the U.S. in the last decade. That production of what the author calls “conventional oil” is declining leads him to suppose that the much-feared “peak oil” period is finally upon us, an eventuality that will lead to severe economic dislocation as the world scrambles to retool. The problem, of course, is that the future is a moving target, and peak oil has been a thing since the days of the first oil embargo, even as the fossil-fuel economy keeps chugging on. Still, looking at economies addicted to cheap oil, it’s hard to disagree with Auzanneau that “any reasonable person can see that it’s time to detoxify.” As alarmist as Daniel Yergin’s The Prize was triumphalist, Auzanneau’s book might not persuade fossil-fuel investors to divest, but it makes a strong case for putting eggs in more than one basket, to say nothing about the thought that much political unrest can be traced to the endless jockeying for power among the major players—Russia, the U.S., Britain, China, and so on. Some fascinating asides include the author’s behind-the-curtains look at organizations such as Aramco, OPEC, and the Safari Club, “a secret group of intelligence services united to fight communism in Africa.”

Though lending itself to debate, this book is of considerable interest to students of energy economics, geopolitics, and modern history.