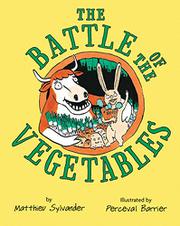 THE BATTLE OF THE VEGETABLES

In the first story, a patch of leeks dreams of adventure to the far reaches of the Earth—the North Pole, the South Pole, and the West Pole are all named as possible destinations. Then a cow passing by tricks the naïve leeks into believing it’s one of Santa’s reindeer (from the North Pole!) and entices them to file out of the garden through a gap in the fence. Ultimately, the cow is more like a wily folk-tale fox: a page-turn reveals the leeks marching right into its waiting, open mouth. In the next story, the carrots laugh at the leeks’ demise but then worry that the “reindeer” may return for them. They tunnel through the earth to escape, only to end up in a cavern full of bats, who then take them to a party at a rabbit warren. The twists and turns of the stories are humorously bizarre and culminate in the third story, featuring a battle among the carrots, leeks, and other vegetables, until they all end up in a big pot of soup. The translation offers children both rich vocabulary and Gallic humor: "Bats. Right. An anguished murmur passes among the carrots." Barrier’s ink drawings employ energetic, humorous line that recalls James Marshall in its ability to express broad emotion in just a few strokes.