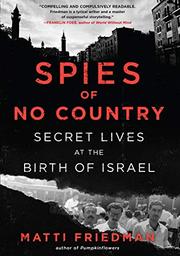 SPIES OF NO COUNTRY

Secret Lives at the Birth of Israel

A focused espionage tale of the beginning of Israel and the spies who “turned out to be…the embryo of one of the world’s most formidable intelligence services.”

In his latest book, former AP correspondent Friedman (Pumpkinflowers: A Soldier’s Story of a Forgotten War, 2016, etc.), whose reporting has taken him to many parts of the Middle East, writes primarily about Arab Jews from the Islamic world who left their countries because they were persecuted and harassed. Unfortunately, in Israel, they were condescended to, ignored, and pushed to the fringes, believed not to be a real part of Israel. “The Israeli identity is increasingly Middle Eastern,” writes the author, “but the old languages and mannerisms are gone, as the Zionist movement always intended.” Friedman tells the fascinating story of the Arab Section, part of the Palmach, the Jewish underground army before there was a Jewish state. These men were from the Islamic world, thus easing their task to infiltrate it. Friedman focuses on four specific spies, all under the age of 25—Gamliel Cohen (from Damascus), Isaac Shoshan (Aleppa), Havakuk Cohen (Yemen), and Yakuba Cohen (Jerusalem, British Palestine)—who served as the link between the amateurish, small-scale beginning of Zionist intelligence, when Israel was a wish and not yet a fact, and the more professional efforts after 1948. The Palmach had very little money; the spies contrived their own cover stories, and equipment and communications were sketchy at best. At that time, Israel was many things, and the author deftly navigates the complicated identities and the stories beneath the stories. (One of his sources is the only remaining spy, Shoshan. As Friedman readily admits at the beginning of the book, this is not a comprehensive history of the birth of Israel—and it can’t be, since records are few, confusion was the norm, mistakes were made, and many died.

An exciting historical journey and highly informative look at the Middle East with Israel as the starting point.