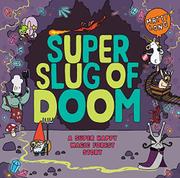 Sliding out from under his rock prison, twirly-mustachioed Zorgoth, self-proclaimed Super Slug of Doom, melodramatically proclaims, well, doom once he quaffs the Potion of Power. Cue the five unlikely heroes who rescued the forest last time: Hoofius the satyr, Herbert the garden gnome, Blossom the unicorn, Twinkle the fairy, and Trevor the ambulatory mushroom! Can they follow the ghastly gastropod’s winding green slime trail past an irate dragon’s molten hot tub, through a village of ogres, and over other obstacles to the mountaintop where a goblet of the puissant potion burbles atop its plinth? Long sends his intrepid questers through a series of full-spread cartoon scenes festooned with magical creatures, mishaps, puckish labels (the Happy Forest has something for everyone, it seems, from “free unicorn rides” to a “stable internet connection”), and side comments in dialogue balloons. In the end the slug is (nonfatally) squashed, his schemes are quashed, and the heroes left awash in admiration as the forest residents do what they do best…PARTY!

Evil gets gooey comeuppance, and the forest is safe…for now.