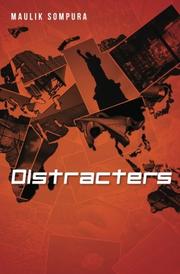 A team of secret operatives creates distractions around the world so criminal organizations can complete their missions.

“We don’t ask. We don’t tell….We get the deal, we take advance for our preparation, we do the job, and we walk away. We are ‘The Distracters.’ We have nothing to do with the ultimate motive of our contact. We create a distraction and let them do what they want to do.” That’s the premise behind Sompura’s debut novel, which quickly grabs the reader and builds tension with short chapters and snappy dialogue. Leading the team is daring, smart Mike, who secures their jobs around the world. There’s also loyal Tina, whose looks make her perfect bait; Shawn, an argumentative Brit who clashes with Mike; tech whiz John; and martial arts maven Catherine. Together, they travel around the world and create distractions like kidnappings and accidents so criminals can achieve their own missions. But a botched assignment threatens their livelihood and their lives. It’s a well-plotted novel, and the twist at the end feels natural and sets up the possibility of future Distracters episodes. The novel has a solid premise, although its writing style—frequent use of the passive voice; long, awkwardly phrased sentences—works against it. Short, fast-moving chapters help. Readers feel like they’re moving as quickly as the players. Sompura sketches places vividly, which builds a rich setting, and he fleshes out sympathetic characters. Given his plotting and take on a typical thriller, the author has promise in the genre, and with time, the strength of his writing should follow.

A well-plotted fast read that suffers from awkward writing.