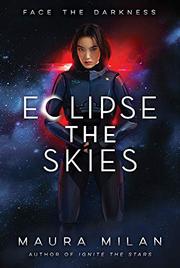 From the Ignite the Stars series, volume 2

Wormholes, chaos, and soul-searching dominate in this thrilling follow-up to Ignite the Stars (2018).

Ia Cōcha, once the universe’s most feared criminal, cooperates with the Olympus Commonwealth to hunt down her brother, Einn, who is hellbent on tearing open the universe. Half-Tawny Cadet Brinn Tarver fears for her family’s safety as her younger brother, Faren, joins refugee communities in protesting the potential termination of the Sanctuary Act that protects them. Knives Adams is suddenly appointed as Aphelion’s new Headmaster by his father, General of the Commonwealth’s Royal Star Force. Even as war rages on around them, war also rages within them. Knives feels lost in his new role and unable to match the greatness of his deceased sister, Marnie, and mentor, former Headmaster Weathers. Ia’s controlling nature pushes Brinn to question her own purpose and side with an unlikely ally. After nearly facing death at the hands of Einn again, Ia’s self-confidence collapses. The constant shifts in perspective feel hasty, but each protagonist’s emotional growth is interesting to witness—Brinn’s most of all. Other fascinating characters, such as Goner, Ia’s chameleonlike supposed archnemesis, and Kami, an unexpectedly powerful being with otherworldly abilities, season the narrative and will leave readers hungry for more information about them. Characters are racially diverse but only refugee heritage is significant here.

Readers will only be disappointed if there isn’t at least one more installment.