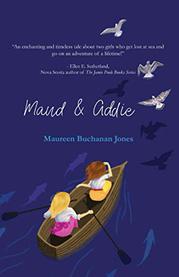 An absorbing tale of two young sisters from Halifax, Nova Scotia, who are swept out to sea and their trials and risk-taking as castaways.

It’s 1910, and the girls are summering, as usual, in the village of Mahone Bay while their parents travel to India for work. The two sisters, 11-year-old Maud and 12-year-old Addie Campbell, accidentally drift out to sea in a small dinghy while rowing home after attending the annual social. In the tumult of the storm, they are shipwrecked on an island. As they await rescue, the girls, who come from a financially comfortable White family that has servants, fall into their assumed roles—more feminine and bookish Addie and adventurous, action-oriented Maud. The crisis, however, brings about a new understanding of themselves and each other. They steal eggs from seabirds, swim nearly naked in the ocean, and find a shipwrecked fishing boat containing a skeleton. This story doesn’t simply focus on food and shelter and rescue—it is more literary, revealing the inner lives of the Campbell sisters, which surprise and delight as much as the vivid creatures in the tidal pools. With confident pacing that rises and falls like the waves, the book charts the girls’ progress as they enter survival mode, growing more resilient and resourceful with each test. The ending, however, abruptly brings about questions not previously discussed, which may leave some readers incredulous while others will yearn for a sequel.