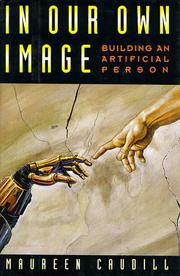 IN OUR OWN IMAGE

The Age of the Robots is here, according to neural-networks consultant Caudill, who paints the current state of robotic research in glowing terms—and then warns that our ersatz spawn may prove to be an albatross around our neck. Two technologies are at work in the creation of an android: artificial intelligence, ``the attempt to make computers behave intelligently''; and neural networks, ``information-processing systems...that mimic our current understanding of the brain.'' Both are in fine mettle, as Caudill shows in what amounts to a book- length recipe for robots. Androids must be able to see, move, talk, remember, plan, solve problems, and learn from experience. Even now, the technology of vision is nearly licked. As for mobility, the first robots will tootle around on wheels, but two-legged locomotion is just a two-step behind. A ``human-like robotic finger'' exists, and today's robots can solve problems that no self-respecting human would entertain (``Delilah is a cat...all cats are furry,'' etc.). Soon robots will speak as fluently as Star War's C-3PO. And so on. Having delivered the high-tech goods, Caudill then performs some astounding leaps of logic and erects, on gossamer philosophical underpinnings, a claim that robots will possess what we know as feeling, mind, even life (according to her definitions, computer viruses are alive). This leads to such weighty questions as whether android hookers will be legalized (``might it not be safer from a hygienic perspective'') and, we kid you not, ``Could an android become...a Jewish rabbi?'' An intriguing, albeit clunkily penned (``NETtalk was an attempt to demonstrate neural network speech generation system capabilities''), glimpse into the current state of robotic research and of computer-jock fantasy. (Four halftones and 29 line drawings- -not seen.)