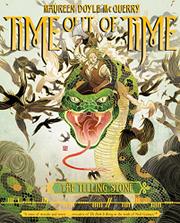 From the Time Out of Time series, volume 2

Timothy James Maxwell and his friends continue their adventure in cosmic realms.

Think of The Dark is Rising and A Swiftly Tilting Planet: when Celtic forces of good, evil, and the fairy folk come together, snow flies, winds rise, and mere mortals are caught off balance. McQuerry dives right in, picking up where she left off in series opener Beyond the Door (2014). The one-eyed evil representative of the Dark, Balor, wreaks havoc on the Marketplace out of time, while armies of trees and birds join to beat back his reptile and insect forces. An enigmatic map and a Christmas (when “the Light comes into the world”) trip to Edinburgh set the stage for another mythic encounter between good and evil. McQuerry borrows freely for her tropes, tossing in ancient tales, the Scottish regalia, Macbeth’s Dunsinane, the Wild Hunt, and fairy folk with a great deal of scope and ambition. Though she slides distractingly from one point of view to another in early chapters, she sticks with young Timothy for most of the rest, engaging readers in his predicament and the web of cosmic tension. The overlap of mythical and present is nicely realized, with adults especially not what they seem, whether representative of good or evil.

Uneven yet at moments exceedingly exciting: readers who stick through to the end will be looking for the next in the series.