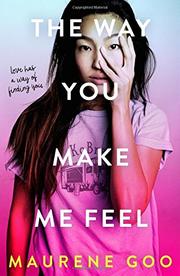 THE WAY YOU MAKE ME FEEL

A spirited teenager learns about the meaning of love, friendship, and family.

When spunky Clara Shin, the daughter of two Brazilian immigrants of Korean descent, is forced to make up for a school prank by taking a summer job working in her father’s food truck alongside her nemesis, Rose Carver, a perfectionistic, overachieving classmate who looks like a “long-lost Obama daughter,” she thinks it’s the end of her summer. Clara’s insouciant and rebellious demeanor hides profound feelings of rejection over her glamorous mother’s decision to leave the family when Clara was 4 to jaunt around the world as a social media influencer. Clara is most comfortable hanging out with a crowd of kids who are similarly rebellious and disengaged, but a budding romance with earnest Chinese heartthrob Hamlet Wong, who works in a neighboring food truck, and a developing friendship with Rose, who has never had a BFF, teach Clara that there’s an upside to taking risks and letting people get close. When Clara feels hurt by her father’s negative reaction to a well-intentioned surprise, she takes off on an adventure that ultimately opens her eyes to all the good things that await her back home. Clara’s personal growth during this summer of change is realistic and convincing.

Snappy dialogue and an endearing cast of characters bring to life this richly-drawn portrait of multicultural LA.