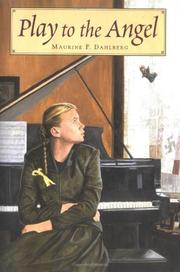 PLAY TO THE ANGEL

It is 1938 and Hitler’s plan to annihilate the Jews has just extended into Vienna. Twelve-year-old Greta Radky knows only one thing to be true in her life—she wants to become a concert pianist like her late brother, Kurt. To make ends meet on a dressmaker’s salary, however, isn’t easy, and it takes considerable acts of persuasion before Greta’s mother (Mutti) agrees not to sell their piano. When Herr Hummel, a reclusive pianist, moves into a nearby apartment, Greta’s uncommon talent comes to light and she’s given the opportunity to shine in a recital at the Academy of Music and Performing Arts. Greta often practices at his apartment so she can rehearse undisturbed. Wishing to repay him, Greta stashes money in a secret compartment within his desk, along with his passport, never knowing that one day both would be needed to save his life. When SS officers arrive to ransack his apartment, Hummel’s true identity is revealed as Karl von Engelhart, a world-renowned pianist who uses his fortune to help Jewish artists flee Germany. Greta lies to the SS officers regarding Hummel’s whereabouts, then brings her beloved teacher money and his passport to escape to Prague. Eventually, Greta and her mother must flee to Switzerland; having once worked for Jews, no one will purchase dresses from Mutti. Dahlberg has captured the fearful mood of Nazi terror in Austria; the reaction to Nazi propaganda by supposedly “decent” people will never be made palatable. The ugliness is laid bare: Greta’s music by Mendelssohn is ripped up by Nazis because the composer is Jewish. A Catholic friend is tortured just because her hair and eyes are dark. Nazi posters depicting hideous caricatures of dark, hook-nosed Jews are described. The blue angel that hangs above Engelhart’s window symbolizes a whole culture’s need for divine interception. Unforgettable writing from a first novelist. (Fiction. 8-12)