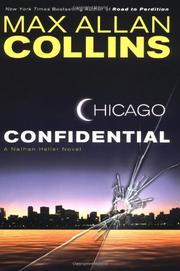 There’s no percentage in Nate Heller’s getting involved with Senator Estes Kefauver’s investigation of organized crime. He knows where too many bodies are buried; in fact, as he cheerfully notes, he’s buried some of them himself. So when Kefauver’s dog-and-pony show comes to Chicago, Heller exiles himself to the A-1 Detective Agency’s Los Angeles office—until a tumble with a wannabe starlet sends him back to the Windy City, where his old friend Bill Drury, who signed on as an A-1 op, has been helping the Kefauver Committee by borrowing the company’s equipment to spy on Al Capone’s surviving cousins, the Fischetti brothers. Despite their friendship, Heller cuts Drury loose in order to keep from falling off the tightrope between government lawyers who want him to testify and the Fischettis—dumb Joey, brutal model railroader Rocco, and slick patron of the arts Charley—who want him to take a powder. Disgusted by the sleazy tactics of Captain Dan (“Tubbo”) Gilbert, the genially crooked ex-investigator for the State’s Attorney who’s now running for Cook County Sheriff, Nate finally agrees to help Drury and his friend Marvin Bas, an attorney working for Tubbo’s clean-cut opponent, but his change of heart comes too late to save Drury or Bas or Jacky Payne, the discarded girlfriend of Rocky Fischetti Nate had befriended and bedded.

More menace than mystery, but Nate’s return to Chicago restores him to his roots, moves this venerable series up to 1950, and shows a deeper grasp of criminal history than most of Nate’s star-studded cases (Majic Man, 1999, etc.).