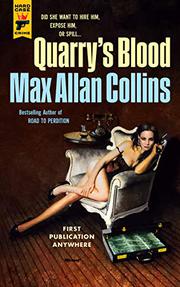 In yet another final installment of his pulpy franchise, retired hit man John Quarry meets his daughter, who turns out to be a chip off the old block.

After a prologue in 1983 Biloxi in which Quarry dispatches the team of killers who’ve targeted his former lover Luann Lloyd, a former pole dancer who manages her own club, the story leaps to the present, a most unfamiliar time frame for the hero, who’s now pushing 70. Tracked down by true-crime author Susan Breedlove, who, like him, has based several of her books on his exploits, he’s reluctant to revisit the past—“I hadn’t killed anybody in fifteen, sixteen years!” he protests—until he figures out that she’s his daughter, come to warn him that yet another contract has been taken out on his life. The leading suspects she’s identified after a careful study of his adventures are Montgomery Climer, the Memphis impresario who revitalized the struggling Climax empire by putting a blue-collar, right-wing spin on the magazine and its clubs; Jeffrey Kinman, who inherited control of the Quad Cities’ Concort Inn from his late uncle, a partner of the Broker, the former liaison Quarry killed; and Theodore Brunner, whose brother Alex ended up in the trunk of one of Quarry’s many cars after he took out that 1983 contract on Luann. Since Quarry is Quarry, he winnows the field of suspects by arming himself and confronting each of them face to face, unearthing yet another unexpected offspring (not his this time) along the way. A coda, “Quarry’s History,” explains how this unlikely sequel came to be and acknowledges that more may well follow.

Easy listening for readers whose preferred soundtrack is muffled gunfire.