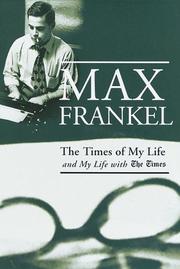 THE TIMES OF MY LIFE

and My Life with the Times

An honest, bracing memoir from one of the nation’s most distinguished journalists. This is a tale of escape, assimilation, and success. Frankel, retired executive editor of the New York Times, fled as a child with his mother from Germany on one of the last visas issued by the US Embassy in Berlin after the outbreak of war. The visa was obtained because of the efforts of his mother, a kind of human Roadrunner adept at narrow escapes, who faced down the Nazis in feats of courage and wicked wit. His father went east through Siberian camps; surviving, he finally escaped Soviet anti-Semitism and bribed his way to New York. The son, scarcely daunted, took up newspaper work at Columbia University and never looked back. This critical, self-critical, and wise story of Frankel’s life will also be catnip to those who wish to learn more of the internal history of the Times. In sharp portraits of those with whom he worked (James “Scotty” Reston and Arthur “Punch” Sulzberger among them), Frankel reveals much of the newspaper’s role in events at which he had a ringside seat: Khrushchev’s Soviet Union, the Cuban Missile Crisis, the Pentagon Papers and its resulting path-breaking First Amendment defense, and Watergate. While not everyone will sympathize fully with Frankel’s justifications for all the changes that have overtaken newsroom culture, his own paper, or American journalism—changes for which he was in part responsible—few will tire of his stories and reflections about them. And everyone will gain from his clear explanations of journalistic codes of reportage and behavior. While much of his chronicle concerns his professional life, one also gets a clear sense of Frankel the son, husband, and father—and of the principles, intelligence, and personality that eased his way along. Informative, thoughtful, delightful. (32 pages photos, not seen) (Author tour)