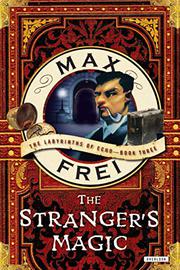 From the Labyrinths of Echo series, volume 3

by Max Frei translated by Polly Gannon & Ast A. Moore

There are reasons to worry that Frei's (the author's) schtick is getting a little thin: Frei (the character) spends most of his time mugging and smirking, though he’s come into some good luck by having been placed in a position of power in the Unified Kingdom, chasing around the ever-weird city of Echo “to investigate cases of illegal magic and battle trespassing monsters from other worlds.” This being a work out of Russia, let’s not forget the job of picking on travelers, too: “I still can’t explain why a bunch of grungy gypsy women made me so furious.” But “picking on” isn’t quite right, not when “annihilating” is the better word: “Moments later, everything was over: an unattractive heap of assorted colorful rags lay on the sand, and I moved onward.” But never mind the discomfiting politics; Frei (the character) eventually finds his stride and investigates some proper capers, including the possibility of a palace coup, an attempted murder and a bungled burglary. Frei (the author) works under some long shadows; there are moments that might have come from the pages of Douglas Adams, others that wouldn’t be out of place in Alice in Wonderland. Frei (the author) relies on his by-now-trademark goofiness and a lot of witty back-and-forth to move his story along, but in the end, the plot is messy and not well-resolved—leaving room, of course, for yet another volume in the Labyrinths of Echo series.

Literate, silly fun, though the reader might wish for a little more energetic storytelling and a little less japery.