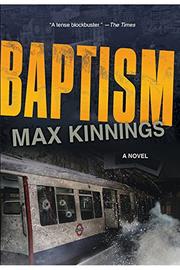 Kinnings’ debut is a grueling, minute-by-minute account of the eight hours after a pair of religious fanatics seizes control of a train in the London Underground.

Service on the Underground is so often disrupted by unscheduled maintenance or terrorist threats that it’s quite a while before the 300-plus passengers realize Northern Line Train 037 has stopped in a tunnel between the Leicester Square and Tottenham Court Road stations for entirely different reasons. It’s only the driver, George Wakeham, who knows from the beginning that the train has fallen under the control of ex-soldier Tommy Denning, 25, and his twin sister, Belle. But George can’t do anything to stop the Dennings or his wife and children will die. Special Branch hostage negotiator DCI Ed Mallory, who's blind, is called in to talk the Dennings out of whatever they have in mind. He finds himself equally hamstrung by Tommy, a homegrown Christian psychopath who’s cheerfully implacable about his plans for the hijacked train, and MI5 types like Mark Hooper and his boss, new director general Howard Berriman, who won’t give Ed the support to do what he feels he must. When the Dennings pull off a nasty surprise that starts the clock ticking toward the deaths of everyone on the train, Ed realizes his only hope for a happy ending lies in professor Frank Moorcroft, an Underground expert who never met a qualifying clause he didn’t like, and Conor Joyce, a former MI5 explosives expert who lost his wife and unborn child to the same Provos who blinded Ed 13 years ago and who’s always blamed Ed for their deaths.

A greased-lightning thriller that will doubtless make a perfect summer movie—preferably one to sit through on the hottest day of the year.