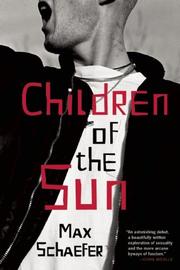 CHILDREN OF THE SUN

Schaefer’s debut novel is built on two alternating narrative threads. The first focuses on Tony, a teenager whose sexual awakening occurs at nearly the same time he becomes involved in England’s white-power movement of the '70s. The scene is defined by hypermasculine trappings—heavy boots, violence and aggressive punk rock—and though homosexuality within the tribe is an open secret, Tony has to be careful while negotiating it. The second thread, set in 2003, concerns James, a young writer researching the very movement that Tony was involved in. Alternating between the two time periods is a revealing conceit: It shows how time transformed skinhead culture from something that was brutally racist to a relatively benign sex fetish. Where Tony furtively negotiated hookups in bathroom stalls and participated in group melees with blacks and Asians, James spends time on personals sites online where men merely play-act as Nazis. Still, the role-playing has a virulent power of its own, and as James becomes more involved in his research, his friends have legitimate concerns that he’s gone native. The book is based on plenty of research—the text is interspersed with reproductions of fanzine articles, flyers for white-power bands like Skrewdriver and news stories, with a particular focus on the life of Nicky Crane, a neo-Nazi who had a complicated relationship with the movement before dying of AIDS in 1993. That historical verisimilitude is matched by Schaefer’s skill at showing how racists come to rationalize their hate. Too often, though, James’s dialogue lapses into history lessons about the white-power movement, and in the same way that James’s obsession overwhelms his friendships, secondary characters in the book—musicians, party leaders, boyfriends—rarely feel like more than tokens. By the novel’s end, Tony and James’s lives have moved in surprising ways, but the subplots and detail sap some of the climax’s dramatic power.

A daring exploration of a touchy subject, but with less emotional force than its setting would suggest.