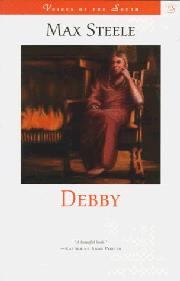 As Harper Prise Novel, this will have attention, with attendant sales potentials, that it might, in the ordinary course of events, fail to achieve. We grant the originality of the subject -- a heroine on that borderline of sanity, euphemistically called ""retarded development"". We grant a tenderness, a compassion, in the handling of Debby, the difficulty of her adjustment, her striving for the role of mother and achieving instead the equally vital role of eternal companion in a child's world. We felt the magic of her fantasy world -- but felt, too, a brooding sense of tragedy in the making, a tragedy never fully realised. Debby -- after seven years in a home for delinquent women was taken by the Merrill family as a sort of second maid. But as the weeks and the months rolled up, her identity with the family seemed quite different. She filled, for the children successively, the gaps left by their mother's coldly reasonable and scientific attitude towards a rule of thumb up-bringing. She was an understudy, who became to them infinitely more important than their mother -- and a weird sort of antagonism in identity developed. There were occasions, as the children reached maturity, when Debby's undeviating devotion proved embarrassing. The scene at the dinner given for Rebecca's prospective in-laws -- the subsequent scene as Debby followed Rebecca up the aisle, lend touches of high comedy-cum-tragedy that will stay long in memory. Debby's death, at the end, puts finis to a career that had reached fulfilment.... Where for us does the story fail to meet its goal? Perhaps in the looseness of story structure. Perhaps more in the failure of the author to make Debby as lovable in her eternal child character, as he would have us believe her to be. Dan Wickenden has handled in his Tobias Brandywing a somewhat similar design with, for us, more consistent success in difficult balance of fantasy and realism, more heart-warming a creation of character.... A first novel, of distinction, but not an easy book to sell.