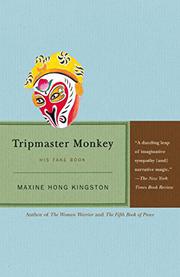 In The Warrior Woman (1976) and China Men (1980), Kingston approached the genius of the Chinese-American heritage in a robust blaze of mythic intuitions and shrewd, historical, autobiographical notation. Here, in her first novel, she swirls stories from myth and wild circumstance about the Sixties' soul-journey of a recent Berkeley grad of Chinese ancestry—as he pads about the S.F. environs on Steppenwolfian, jumpy paws, experiencing Vietnam-era Fear and Loathing, love and friendship, and the creative bangs and shudders of a poet. He'll finally bring to birth "an enormous loud play. . .that will make us [Chinese-Americans] braver. . ." On the way to reawakening the Chinese soul via the great show, Wittman Ah Sing, fired from a department store (something naughty went on in Toys), parties (sans drugs) with inventively seeking pals and strenuously experiencing LSD heads; falls in love ("she likes me, a heartbreaker and a rover"); gets married (sort of), but the two may not love; visits satisfyingly mad parents; confronts the Government at the Unemployment Office; and at last casts his theatrical epic with a cast of Wittman's everybody (after all, "it takes enormous populations to play out all the ways of being human"). Among the cast: a Japanese friend and his Young Millionairess; the wife Wittman may not love and the beautiful girl he may; mother Ruby and her showgirl pals who'll perform again their (WW II) War Bonds China Rescue act; "old futs"; PoPo, the luck-crowned deserted grandmother; and a cast of neighborhood thousands. At the first night close (the play is continuous, night after night) of story, music, and dance, Wittman—in a fiery monologue—blasts the "innocent" ones who won't recognize other Americans in their native land ("We need to take the hyphen out. . .'American' the noun and 'Chinese' the adjective"). There are some enchanting turns here (a boring girl becomes a "blue boar" in a twinkling—" the lips moved, the tusks flashed"); and throughout Kingston offers bright-bannered "talk stories" of heroes and monsters, the grand and gruesome. But trips inside the head of a heavy experiencer and fantasizer can create a static, claustrophobic climate. As for Wittman's ethnic-pride orations—right on! (though better said than read). Rather a dense, occasionally rewarding trip, which should ride comfortably on the excellence of Kingston's nonfiction.