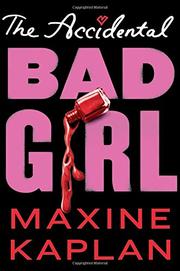 A once-popular prep school girl, blackmailed into working for a drug dealer, sleuths out the true criminals.

Kendall was once a member of the popular clique of mean girls, until she was caught having sex with her best friend’s ex at the end of junior year. Nobody blames Grant for the semi-public sex, but Kendall starts senior year ostracized: Her friends have shut her out, she’s being slut-shamed, and she’s even physically attacked at school. Someone’s hacked her Facebook account, making it look like she’s been spending time with a drug dealer. Mason, the young white man who provides Ecstasy to local teens, improbably blackmails Kendall into delivering his drugs. As the wealthy white girl encounters careless malevolence throughout her community, she rages against gender-biased social standards. The boys—college bros, dealers, nerds—all share a sense of entitlement when it comes to the girls’ bodies and behavior. Kendall begins by looking out for No. 1, but as she discovers her part in something far more vile than delivering Ecstasy, she considers putting herself on the line to do what’s right. Ultimately, the girls, while never holding hands and singing “Kumbaya,” do come together to fight against rape culture.