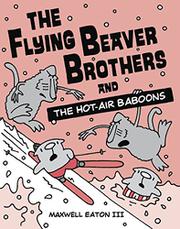 THE FLYING BEAVER BROTHERS AND THE HOT AIR BABOONS

The plot summary for one of the Beaver Brothers books might look like this: Ace and Bub have to keep Beaver Island safe from a group of (plural name of an animal) with a giant (household appliance) that goes (sound effect). In this newest volume, for example, baboons are using an enormous hair dryer to melt all the snow on the island. They want to build a water park. The hair dryer goes “HAROO!” when it’s switched on. This book, like the previous four, is almost as funny as a great Mad Lib. But for returning readers, this may seem like a familiar, fill-in-the-blanks sort of plot. Maybe the next book will stray a bit from the animals-with-appliances formula. The artwork and sound effects are hilarious, as usual, but the simple line drawings don’t convey nuance very well, and the climactic action sequence is a little difficult to follow. It’s like a Michael Bay movie translated into emoji characters.

If the story is disappointing, it’s only because the earlier books in the series set such a high standard: All of the jokes work, but die-hard fans may feel a little exhausted, as though they’d just finished their 100th Mad Lib in a row. (Graphic novel. 6-9)