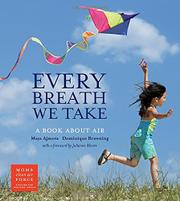 EVERY BREATH WE TAKE

A Book About Air

Sentences of large-print text and colorful stock photographs move from the ubiquity of air to pollution to fighting pollution.

After an upbeat foreword from actor Julianne Moore, who mentions, among other things, that “kids are smart,” it is a letdown to realize that most of the pages that follow are generalized truisms about air that only the youngest children may not have grasped—that air goes out “when a baby screams”; that all creatures and all plants need air; that wind is moving air; that air carries sounds and smells. The book then amps up the complexity with the statement that “air looks and smells bad when it is dirty. That’s called air pollution.” Nevertheless, an older child might enjoy reading the book to a younger one and explaining such photographs as one with solar panels and another showing a child using an inhaler. Both text and photographs are winners in terms of gender equality, multiculturalism, and ethnic diversity. After the final comparison of clean air to love, there are two pages with a little more specific information, such as a simple explanation of air’s composition and the cool fact that children take about twice as many breaths as adults. However, even here there are too many sentences reiterating the fact that clean air is important.

A prettily packaged bit of environmentalism for the youngest readers from a writing team of children’s health advocates.