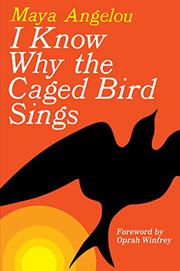 I KNOW WHY THE CAGED BIRD SINGS

Maya Angelou is a natural writer with an inordinate sense of life and she has written an exceptional autobiographical narrative which retrieves her first sixteen years from "the general darkness just beyond the great blinkers of childhood."

Her story is told in scenes, ineluctably moving scenes, from the time when she and her brother were sent by her fancy living parents to Stamps, Arkansas, and a grandmother who had the local Store. Displaced they were and "If growing up is painful for the Southern Black girl, being aware of her displacement is the rust on the razor that threatens the throat." But alternating with all the pain and terror (her rape at the age of eight when in St. Louis With her mother) and humiliation (a brief spell in the kitchen of a white woman who refused to remember her name) and fear (of a lynchingâ€”and the time they buried afflicted Uncle Willie under a blanket of vegetables) as well as all the unanswered and unanswerable questions, there are affirmative memories and moments: her charming brother Bailey; her own "unshakable God"; a revival meeting in a tent; her 8th grade graduation; and at the end, when she's sixteen, the birth of a baby. Times When as she says "It seemed that the peace of a day's ending was an assurance that the covenant God made with children, Negroes and the crippled was still in effect."

However charily one should apply the word, a beautiful book, an unconditionally involving memoir for our time or any time.