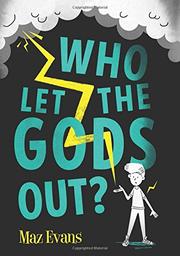 WHO LET THE GODS OUT?

A semiorphaned boy accidentally discovers that the gods are real and finds himself drawn into an ancient mythological war with the fate of the world hanging in the balance. Sound familiar?

Abandoned by his father, Elliot Hooper, a 12-year-old English white boy, struggles to care for his ailing mother, save their ancestral farm from being sold to a greedy real estate developer, and not fail out of school. When Virgo, the beautiful, immortal goddess from the Greek zodiac, crash-lands in Elliot’s cowshed, he is drawn into her mission to feed a godly prisoner held underneath Stonehenge, mistakenly unleashing an ancient evil that threatens the mortal and immortal realms. Evans’ debut novel is a breathless roller-coaster ride taking readers on a mythological tour of Elysium, the Underworld, and everything in between. Drawing heavily on stylistic elements reminiscent of Rick Riordan with a hint of Neil Gaiman’s Stardust, the author’s godly characters are a modern family whose dysfunction would make Jerry Springer salivate. Their antics anchor the story’s humor, but otherworldly elements such as the What’s What guidebook to universal knowledge are less finely drawn. Elliot’s struggles and clear motivations create genuine appeal, but other characters—particularly the perfectionist Virgo—remain opaque and fit awkwardly into the narrative.

Weaknesses aside, fans of Percy Jackson will devour this and hope that the gods send a sequel.