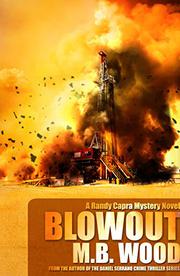 In this sequel, an oil company succeeds despite a dysfunctional chairman, until someone kills him.

The year is 1981. More than a decade has passed since the murderous Captain Courageous stalked Randy Capra halfway around the world. Randy now lives outside Lorain, Ohio, with his wife, Monique, and their three children. He’s the vice president of operations for the DeVille Petroleum Company. When one of its oil wells in Caddo County, Oklahoma, erupts in flames, two DPC workers die instantly while four are critically injured. It takes a week to gain control of the accident site and yet company chairman Dick DeVille isn’t thankful for Randy’s expertise and leadership. He instead complains that Randy took DPC’s plane to the burning well. But Randy knows that the wrong size blowout preventer, suggested by Dick, caused the accident. Company president Bobby Wendover defends Randy’s actions while Dick threatens to fire him. Later, at the DPC Christmas party, organized by Axel Eriksen, liquor flows freely and stripper Marilyn Moore makes the rounds. After the party, when cleaner Graciela Estevez enters the chairman’s office, she finds Dick at his desk with his pants down and his head bashed in. She calls Randy, the only employee she knows who speaks any Spanish. The author revisits his trouble-magnet protagonist of Hunted (2012) at a more secure place in his life, a family man at the dawn of the Reagan era. Wood’s (The Hoo-Li Chronicles, 2019, etc.) knowledge of the oil industry gives the plot weight, as in the line “Dick had told him what specifications his buddies in Houston had suggested, insisting he save money by using a ‘normal’ blowout preventer.” This sequel is also structured more confidently than its predecessor, with richly drawn characters, like the dogged and sympathetic Lt. Jack Grueden, thundering through a traditional whodunit. Still, “sex” remains the operative word at the DPC office because there are enough extramarital liaisons and related fights to win over fans of the soap opera Dallas. While the murder weapon is slightly telegraphed early on, the killer is skillfully hidden until the finale.

This bracing thriller features an intriguing cast and a realistic plot.