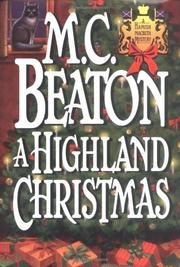 Christmas is only a week away in Lubdoch, Scotland, but Constable Hamish MacBeth, the village’s sole lawman (Death of an Addict, p. 574, etc.), expects no time off. The Calvinist tenor of the area discourages holiday glitter, and Hamish isn’t too surprised when the Christmas lights on the main street of neighboring Cnothan are stolen. He must also deal with the disappearance of Smokey, Mrs. Gallagher’s cat, vanished despite the profusion of locks and bolts on the Gallagher house. A visit to Mrs. Dunwiddy, former owner of the house, living in a nursing home, reveals a violent husband in Mrs. Gallagher’s past. The visit also inspires Hamish to arrange some Christmas entertainment for the depressed residents with the help of eager Charlie and Bella Underwood, old friends and onetime vaudeville stars. There’s yet another good deed in the works for Hamish, having to do with lonesome little Morag Anderson, Morag’s moralistic, uptight parents, and Smokey the cat. Only the appearance of Insp. Blair, Hamish’s longtime enemy, on the warpath as usual, casts a pall, but not for long. A charmingly illustrated Christmas fable sure to please Hamish’s legion of fans and likely to make a few new ones.