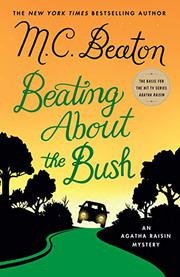 BEATING ABOUT THE BUSH

A most unusual suspect helps a detective solve a case.

The engineering firm Morrison’s has hired Agatha Raisin and her assistant, Toni Gilmour, to investigate a case of industrial espionage after a mysterious fire at their factory in the Cotswolds. On their way home, they spot a disembodied leg in the woods and recognize its shoe and stockings as those of Mr. Morrison’s secretary, Mrs. Dinwiddy. They call the police but feel like fools when the limb is revealed as fake. Many circumstances seem unusual back at Morrison’s, where no one seems to do much and the factory that’s supposed to be producing battery packs for electric cars turns out to be in Poland instead. Agatha’s favorite employee at Morrison’s turns out to be Wizz-Wazz, a donkey belonging to Morrison’s wife, even though she attacks after Toni whacks her on the nose. After Mrs. Dinwiddy is found dead at the stable, the police are ready to write it off as an accidental death at the donkey’s hooves. But Agatha’s certain the obviously traumatized Wizz-Wazz is innocent. When Sir Charles Fraith, Agatha’s longtime friend and sometime lover (The Dead Ringer, 2018, etc.), accompanies her to the factory, he points out actual horses’ hooves that are being used as ashtrays. The fact that one of them has been scrubbed suspiciously clean suggests that Wizz-Wazz was framed. Agatha, devastated to learn of Charles’ engagement to a wealthy, unattractive young woman, continues her investigation into what now seems to be a fake factory and consoles herself with a romance with Chris Firkin, who rents a space from Charles to work on converting cars to electricity. Agatha starts a PR campaign to save Wizz-Wazz while working on the difficult and ultimately dangerous case.

As usual, Beaton conceals any number of surprises behind her trademark wry humor.